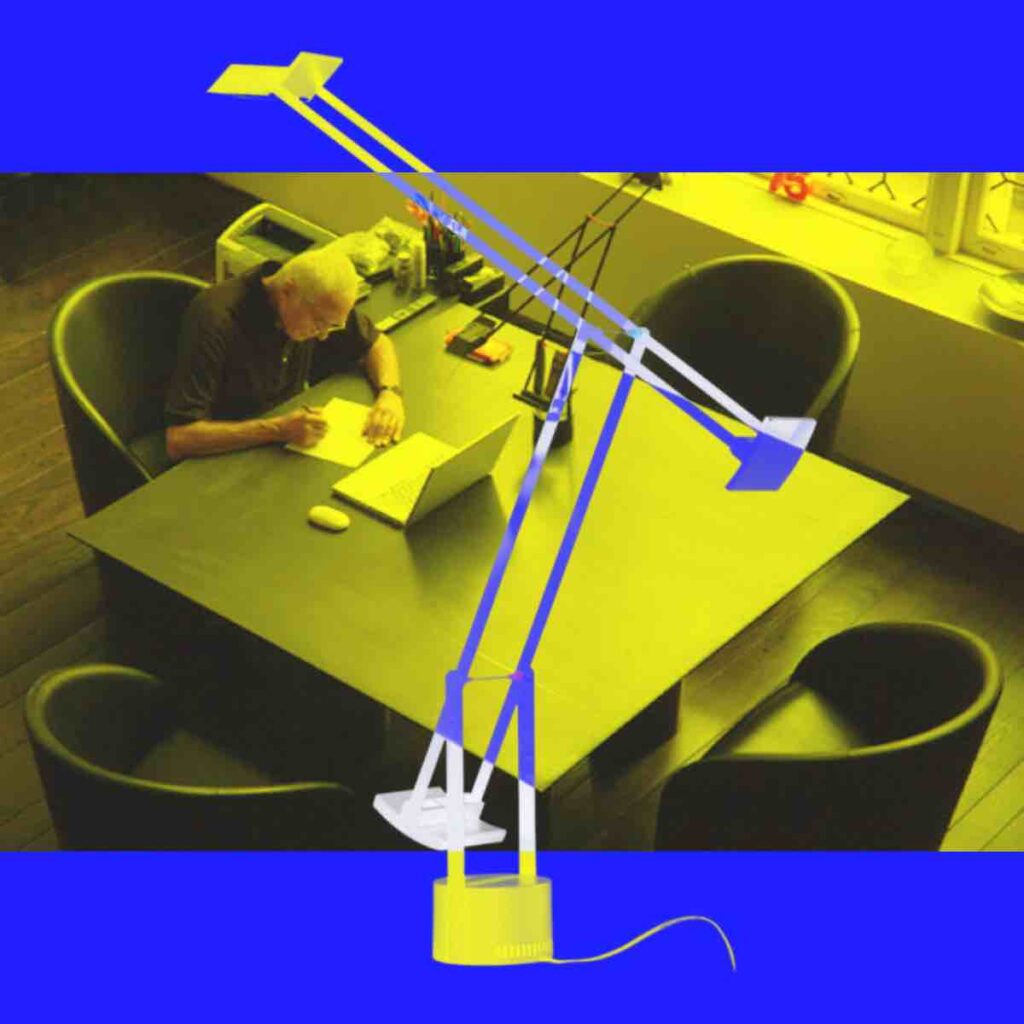 A glimpse of someone’s workspace inevitably brings out the amateur analyst in us, or at least the voyeur. We snoop around other peoples’ desks because we think we will learn something about the psyche of person who works there. From 2007 to 2009 The Guardian ran a series of photographs of writers’ rooms. Each instalment showed an image of the desk where a writer like JG Ballard, Siri Hustvedt or Martin Amis works, and an explanation of their particular arrangement of tschotskes, postcards, scribbled notes, jars of pencils, stacks of papers and books. The writer and illustrator Russell Hoban describes his room, full of all kinds of reference materials, as his “exobrain.” And it’s this fact, that the contents of a mind we admire may take tangible form on a desk, that makes The Guardian series of 116 desk portraits so fascinating. They haven’t yet featured designers’ desks and you might well wonder why, for surely in the practice of design, the residue of working process is as least as legible as it is in writing. Looking at a writer’s desk, one is forced to engage in some fictionalizing of one’s own to fathom how the wind-up plastic crocodile, the seashore pebble and the snippet of overheard conversation scribbled on a bus ticket led to the creation of one of your favorite books. With a designer’s desk, on the other hand, the tools, sketches, reference images, Japanese packaging, type samples and printouts provide the observer with more visual breadcrumbs to re-trace the path taken from initial brief to the final design.

A recurring theme in the writers’ descriptions of their sites of work is the daily battle they wage with chaos and clutter. If The Guardian were to start publishing a series of images of designers’ desks, then my recommendation would be for them to begin with a sparse, five-foot square, steel work-station located in an apartment in New York’s Upper East Side, where many identifying features of America’s corporate, retail and public environments have been generated and where chaos is not merely quarantined, but resolutely exiled.

“Some people thrive on clutter and mess and other people can’t stand it,” says designer Massimo Vignelli in his Italian accent, still thick even after several decades of living in New York. “I like to start the day fresh. If I start the day with things left over, it’s like starting dinner with leftovers—it kills your appetite.” So, even though during a working day, detritus may build up on his desk’s surface, at the end of each day Vignelli clears it away leaving only his laptop, mouse, black Tizio lamp and some white paper and a pencil to calmly greet him the next morning.

Much of Vignelli’s iconic work has been about bringing visually informative order to data chaos, whether by helping New Yorkers in the 1960s make sense of their public transport system with a more legible map and signage or by helping them in the 1970s find the things they needed in Bloomingdales (where he set his curvaceous logo in light for the fashion department, medium for housewares and bold for the men’s store). He has even brought order to nature in the form of his National Parks Service maps and brochures from 1977, where faced with the challenge of rationalizing the disparate publications of more than 350 national parks, Vignelli created a system of standardized folded posters upon which the information is organized in columns hanging from a black band. And his impulse to tidy up has extended to three-dimensional things too, such as his neatly stacking plastic plates for Heller designed in 1967, and still in MoMA’s design collection and its stores as well as kitchens across the land.

Among designers, Vignelli’s geometric desk is legendary, the touchstone by which less-organized mortals measure themselves.

And certainly, the correspondence between the site of production and the work produced is just as harmonious in the case of Vignelli’s desk as it is in Jackson Pollock’s East Hampton painting shed or Dylan Thomas’ Laugharne writing boathouse. To some, however, the Modernist ideology embodied in this desk may seem dogmatic; and, in an era where the reality of designers’ lives leads them to more ad-hoc and nomadic desk solutions in airport lounges, hotels or cafes, using a five-foot square grey steel desk in one place certainly seems anachronistic. And yet Modernism for a designer like Vignelli, born in 1931, trained as an architect and passionate about the power of design as a refining and clarifying force, is not something with chronological limits, nor is it something observed with detachment; for Vignelli, I think, Modernism is something he lives and works within, so much so that it’s impossible to look at things through any other lens. Like the Viennese architect Adolf Loos, who blamed ornament for much of the world’s wastefulness—“Woe betide the writing desk that has to be changed as frequently as an evening dress, just because the style has become unbearable,”—to Vignelli, obsolescence is a social crime. Even his corporate logos, which in most circumstances are among the most ephemeral manifestations of graphic design, are unusually long-lived. His American Airlines logo, for example, has been in use since 1967.

It is entirely logical, therefore, that Vignelli’s desk should be rectilinear, monochrome and durable and that the elements organized upon its surface should themselves be rectilinear and ranged left on an invisible grid. “My desk is very square and strong,” says Massimo Vignelli in a short film made by Imaginary Forces titled The Desk, “It’s very important to have a place where your work is in synch with yourself…I love the desk and the desk loves me.” 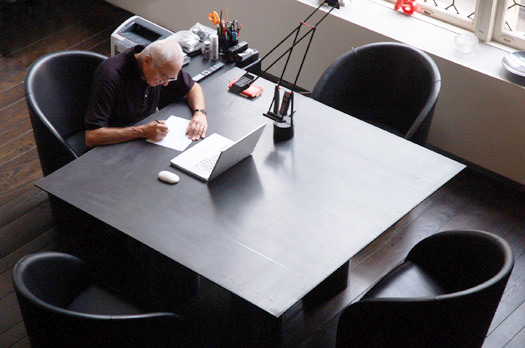 Massimo Vignelli at work at his desk